Mitchell, for those that don’t know, what’s your story so far?

I was born and raised in the R&D lab; a petri-dish brainchild of Clinton and Graham. Jokes aside, I am from Durban, born in ‘94, and I’ve been in Cape Town for about 7 years now.

I believe video is the most powerful storytelling tool on the planet, and will be until Augmented Reality develops to a more commercial level, and I have been OBSESSED with cinema for as long as I can remember. I started making videos on my phone in school and have never stopped. After school, I went to AFDA to study film, although it felt like we were all there to drink and make friends. One of my first two grad films, funnily enough, came first across all three campuses in South Africa. 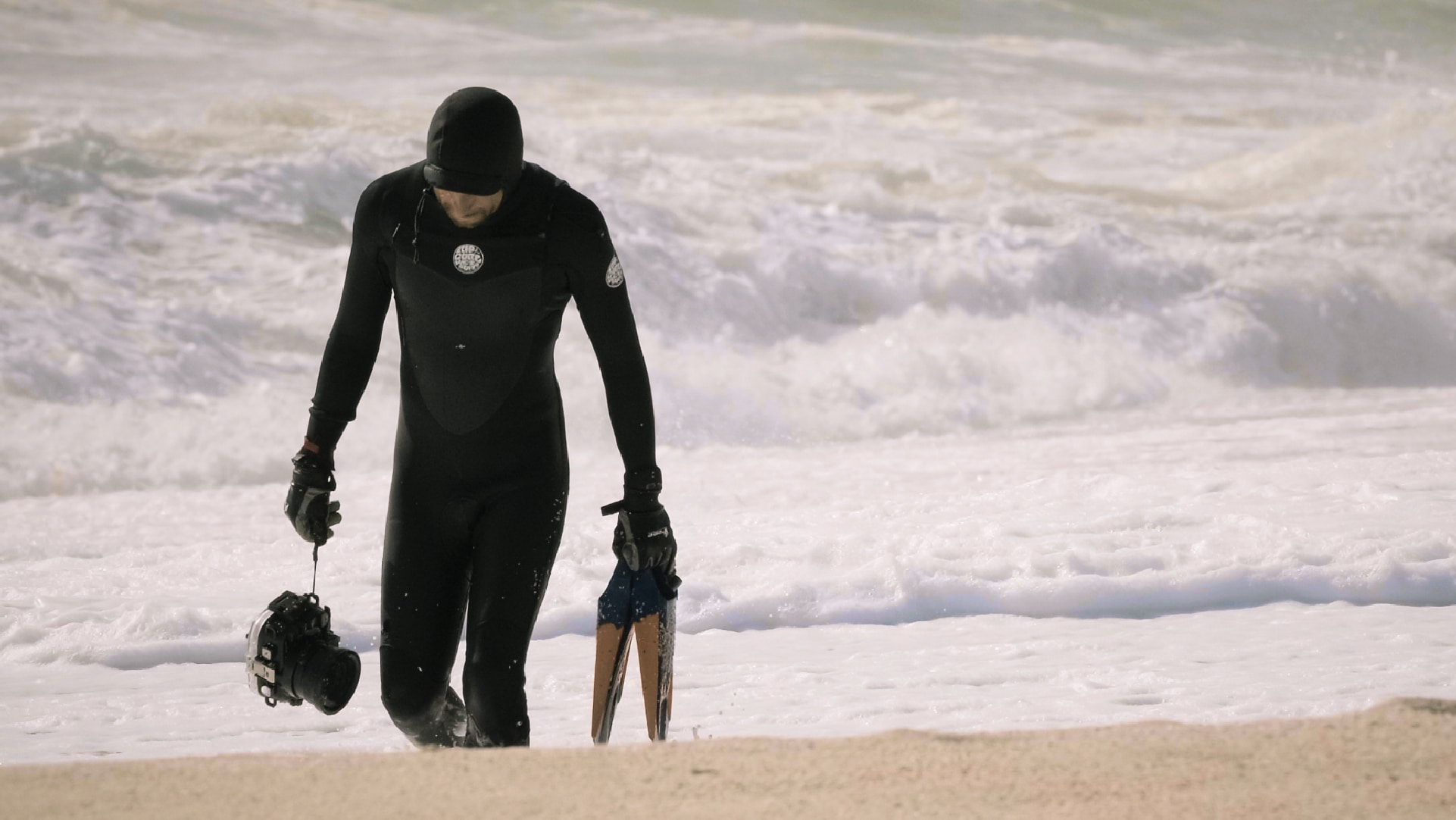 “I moved to Cape Town two months after graduating, when a family friend joked that I could come and stay anytime. I packed my bags that night and called her from the car the next morning to say that I was on my way. Although my stay with her was short lived, and a wild experience in itself, she helped me get my first film job and it’s only been up from there.”

There was a time when I was one of the go to guys for shooting in Africa, which was great fun; very challenging and hot, but so fulfilling. All of this helped me hone my skills, and two things became clear. Firstly, I need to get even better at telling stories, and secondly, I need to work in the ocean. I thought my destiny was to join the Frog Squad, but life had other plans, and a much better opportunity came my way.

I’m now in charge of the media department for one of the biggest kiteboarding brands in the world, as well as being heavily involved in AK.

Sounds like a wild ride, but it’s been great to have you on board!

Let’s jump onto recent highlights, what’s one of your favorite photos you’ve taken and why?

There are some projects in the pipeline that I’m really stoked on, but can’t talk about yet…

From what I can share, I’ve been shooting Jason Van Der Spuy, building content for the launch of the new Airush Lift. There are a lot of factors to line up for Big Air in kiting, and there is a true sense of danger and high energy. This particular photo has to be the highest loop I’ve personally seen someone do while kiting with short lines. I had been trying for a while with Jason to get something BIG, and when it happened, you could feel the energy. 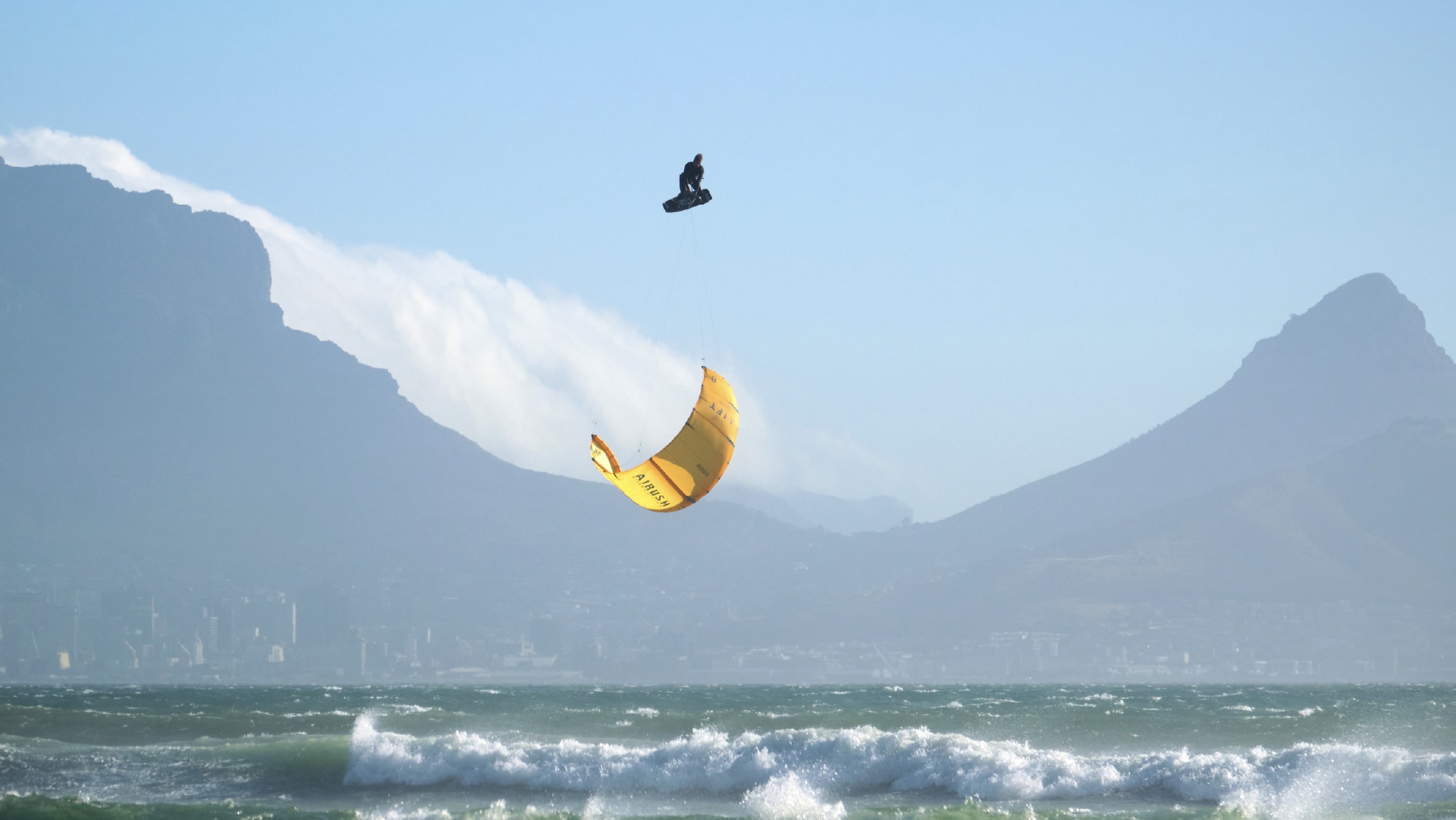 Adriaan and I also had a session recently where we drove over 200kms trying to find some wind, and when we eventually did, the sun was just about to set. We were right back where we started, and we were blessed with one of the most beautiful Cape Town sunsets I’ve seen; I won’t forget being there and feeling the energy as Adriaan sent it! It made all that driving so worth it. 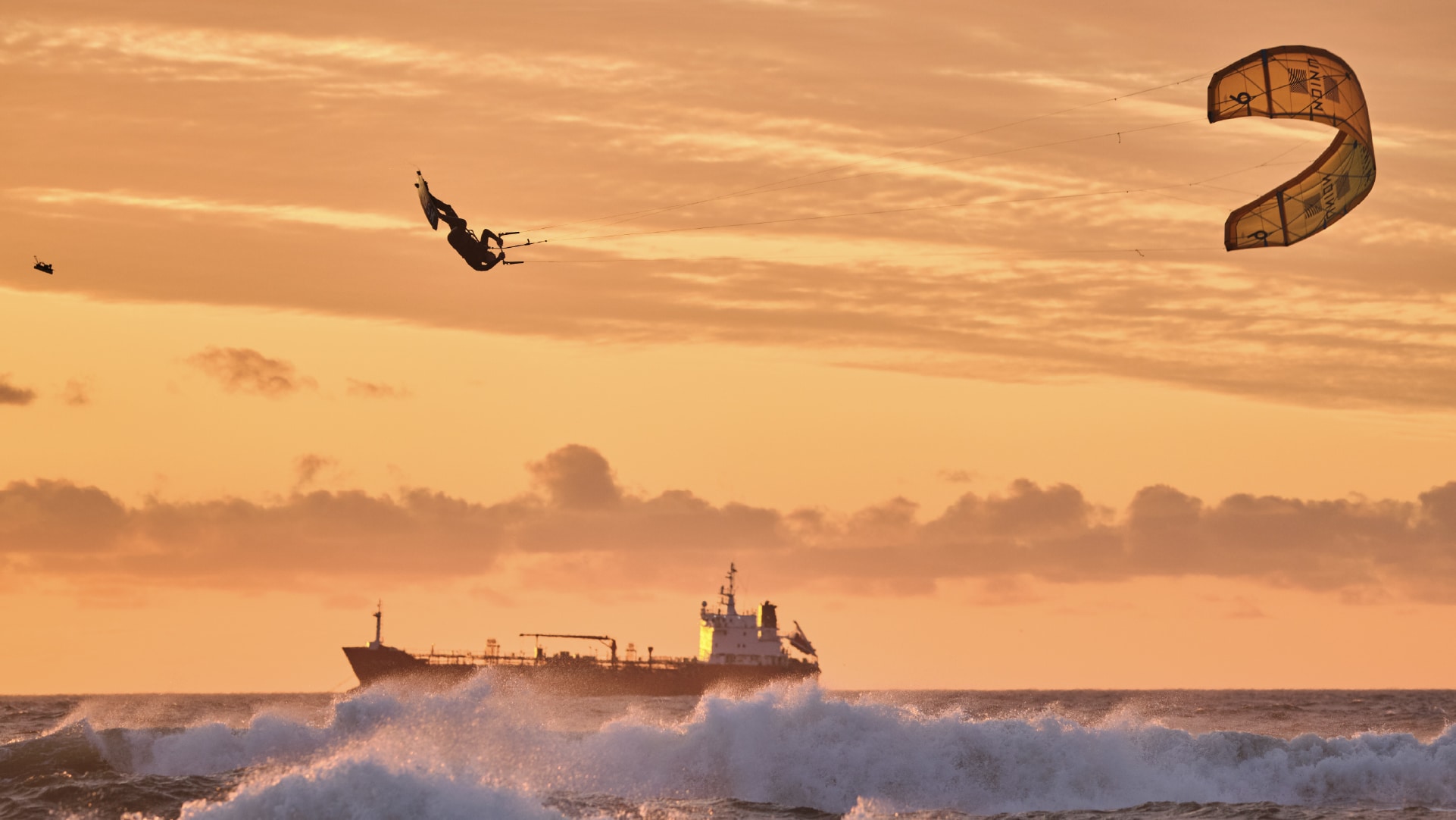 I try to pack my days to the brim. I love routine, and I usually start with a stretch and some yoga before 5:30am. Then I write, journalling and jotting down a daily short story, before I make some coffee and read for a bit.

From there, I go for a surf, or work out and take my dog for a walk. When I surf, she comes with me and chills on the beach, which is great. By this stage I’ve worked up my hunger and eat breakfast before taking a short walk across to the office for a day full of shooting, admin, and editing.

After work, I usually take my doggo for another walk, and then play guitar or piano while having a glass of wine until dinner and watching some series. 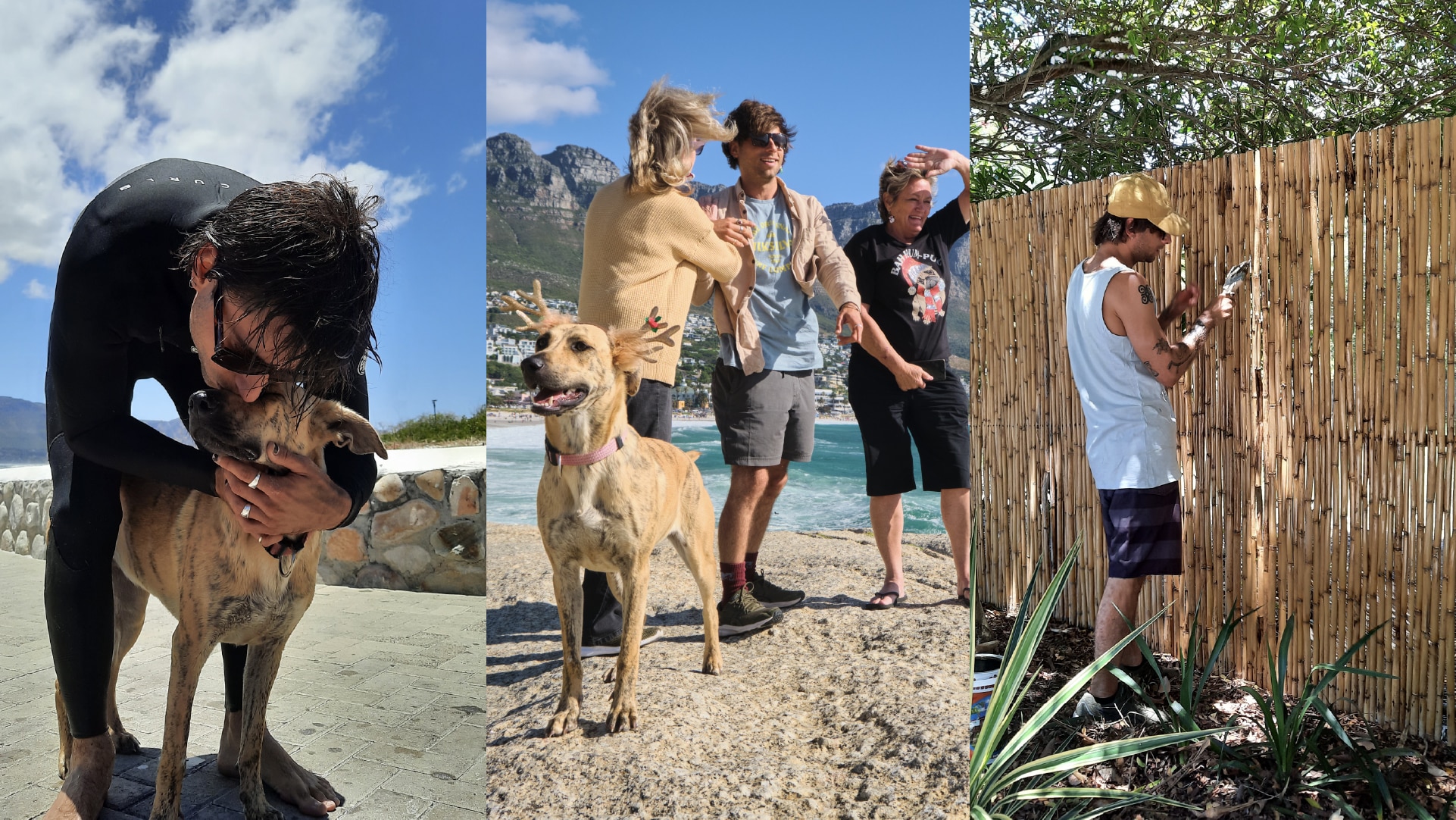 I am so inspired by “the now”, having just spent the last year stuck inside my head, not really able to move. I feel like I completely lost touch with being in the present moment, and I can’t seem to get enough of it now.

I’m surrounded by great people at work too; Clinton with his calm management style and endless ideas, Graham and his relentless pursuit of greatness for the brand, and Stu’s blatant disregard for social norms to express his own world. There are also photographers like Hunter Monero and Jonti Wild, who are doing incredibly inspirational work.

A notable mention goes to my dog’s seeming endless ability to love.

Any recommended viewing for the video heads?

The Dark Side of the Lens was a film I watched many years ago that ignited a fire inside of me, and it’s never stopped burning. I rewatch it all the time, along with Surfs Up. Recently Patagonia released a Stacy Peralta film, The Yin & Yang of Jerry Lopez, which I LOVE.

Why did you get into media production, and what is your greatest accomplishment so far?

My intention is to tell stories, and find my voice while being the voice of others.

There have been some pretty amazing moments in my short career so far. In the traditional film industry, it was pretty big for me to shoot B Cam on Blood and Water Season 1, but getting to work where my passion lies, in and around the ocean, has been a dream come true.

Being a part of the Solar Station Design team has definitely been my favorite highlight so far.

For AK, you recently produced the Florian Jung feature, which is part of the Synth campaign, tell us about that project…

For this, I got to shoot a day in the life with one of the most rad, chilled people, showing his relationship with one of my favorite parts of the world. Hell yeah, what a brief! It didn’t all go as planned, but there were a lot of positives, and I feel the team within SSD got stronger as we overcame the hurdles and learnt what will take us even further in the next project. It’s a constant march, and with every mile we walk, we become more unified as a team. Frothing for the next one!

What was one thing that was crucial in getting you to where you are now?

Trusting myself. I have found that 90% of my problems have just been me in my own way. When I step aside and believe I can do it, that usually unlocks doors I didn’t even know were there.

The AMAZING people I have met along the way have also made an incredible impact on me. I have had a few people take some big risks on me, and although not all have worked out, a lot did. Regardless of the outcome, I just get back up and maintain the focus. One day I might achieve my dreams, and then I can ask, “Now what.” But, until then, the task is clear; constant self improvement, and getting better at telling stories.

Also, write shit down! I cannot stress enough that the written word is the most powerful tool for trying to understand yourself, and gain some sort of control over your mind. 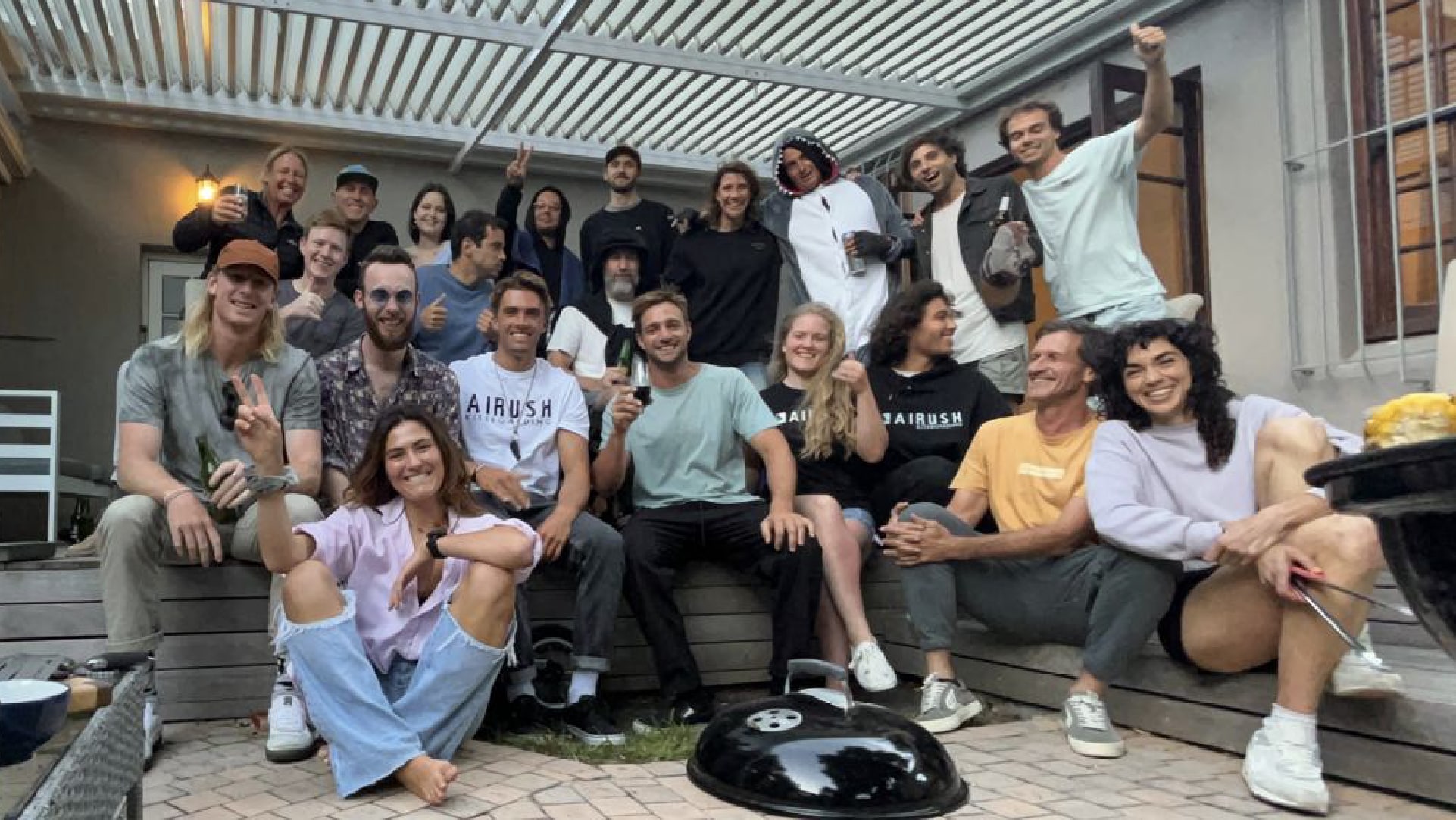 What would you be doing if you weren’t making films?

This is such a good question, I can’t remember ever really considering other options. It freaks me out to think about scrapping everything I have learnt since I was a kid, making silly videos of me and my friends on my Nokia n95.

I would probably be growing food; I love growing my own food. Maybe even music, or writing, as I could do those two things all day. I’ve wanted to own a BnB since I was 15 too, which I’ve been saving towards, and in my 30s it will be happening. A location with good wind has become more and more obvious the longer I’ve worked at SSD; that’s probably what I would do if I didn’t make films.

Being healthy, and developing the relationships and stories I have been for the last two and half years with SSD. I want the watersports industry to see us as the best media house in the world, so I have a lot of work to do, which I am really excited about. 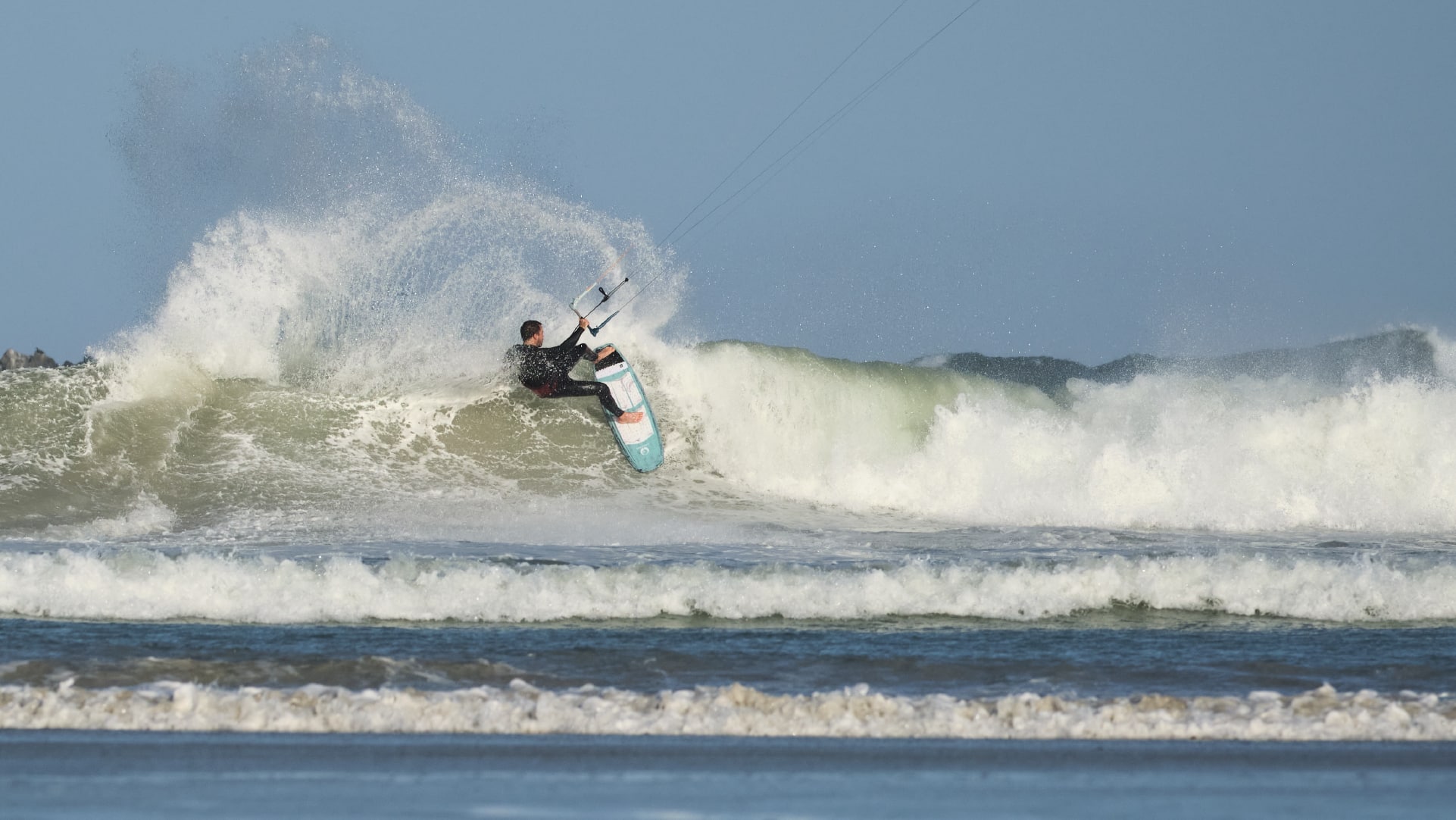